Valley of the Nobles, Egypt

This procedure for installing a PC ATI Radeon HD 6870 Video Card into a Mac Pro works for Mac OS Yosemite, Mavericks, Lion, and El Capitan. Starting with Mac OS X Lion, you don’t have to load the driver, Mac OS X includes the necessary ATI Radeon HD 6870 drivers required for a Mac Pro. Unlike supported cards, the screen still starts out black while the OS is booting.

The default video card, GeForce 8800 GT, in my Mac Pro 3,1 Early 2008 wasn’t performing well for games, so I decided to replace it. After extensive research, I decided on the ATI Radeon HD 6870 1 GB 256-bit GDDR5 PCI Express Twin Frozr II. This card, built on the ATI Radeon HD 6870 platform, has far superior performance to the Apple default GeForce card. It is most likely the quietest card due to the large heat sinks and two fans (instead of 1 like most video cards), and has two DVI, two mini DisplayPort, and an HDMI port. Customer comments confirmed it was quiet and ran cool. More reviews confirmed it ran on the Mac Pro 3,1 (Mac Pro early 2008 running 10.6.7). Now that it is finally working, I can attest that it is a silent card, as quiet as the GeForce 8800 GT that it replaced. Below I explain what it takes to get the card working. 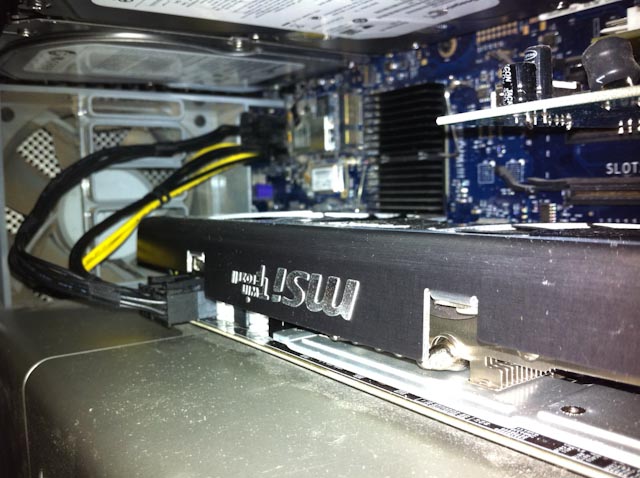 After the card had arrived, I realized the sites I had reviewed were from people booting Windows natively on their Mac Pros. I had no idea so many people are running Windows on the Mac Pro. I spent the next several hours trying to find out how to get this card working. I read articles on how to flash it, various articles on downloading a variety of programs to change parts of Mac OS to get the card working. Finally, after extensive searching, I found the drivers. This posting is a “how-to” guide and hopefully easier to find than the posting where I downloaded the drivers. Note, these drivers aren’t required after Mac OS X Lion.

The best price I found for the MSI R6870 was on Amazon, and you need to order the PCIe PCI-e Power Cable from Amazon along with it.

If you are running Yosemite, you can download and install the drivers while you wait for the Amazon order to arrive.

The GeForce 8800 has a power cable that runs from the motherboard to the video card. You will notice that there are two 6 pin connectors on the motherboard right next to each other (visible in the top left corner of the picture below). The new cable will plug into the empty connector to provide two power cables to the new card. 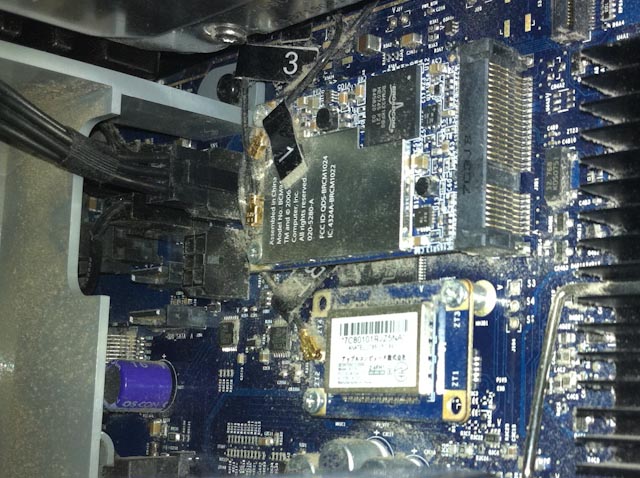 Disconnect the power cable, unscrew the bar that holds the PCIe cards in place, and pull out the 8800 video card. Note that on the PCIe connector on the motherboard there is a plastic catch that you will need to pull up to remove the card. If you don’t, you will break this off. Not the end of the word, but not ideal.

Remove the blue plastic cover over the PCIe connector before installation. Slide the new video card into the bottom slot. Connect the two power cords and replace the bar that holds the PCIe cards in place. Close up the Mac and turn on.

When booting you don’t see the standard boot screen. The screen stays black until the Mac is booted then you see the login screen.

I knew I made the right decision when I cranked up the World Of Warcraft video setting to Ultra, and it worked without any tearing or jumping. The 8800 has 512M of video memory opposed to the ATI Radeon HD 6870 which has 1G. iStat Menus 5 shows that, while WOW is running, more than 50% of the video memory was in use. Since the GeForce card had only 512M, I am sure it was running out.